Chelsea have scored the fewest goals of any of the top-six sides in each of the last two seasons and have since lost top scorer Eden Hazard, with new manager Frank Lampard admitting that goals could be a problem going forward.

The new Blues boss is searching for his first win away at Norwich City this weekend after failing to find a victory in his first three competitive games in charge.

Lampard has experimented with both Olivier Giroud and Tammy Abraham upfront, while Michy Batshuayi is being kept at the club after his loan spell at Crystal Palace. But Lampard doesn’t believe his three strikers should be required to carry the load alone.

Instead, the former midfielder is hoping to get contributions throughout the team as his side looks for the right answers in front of goal.

“Look at Liverpool. Across the front three, they scored 60-something goals last season between the three of them but every team is its own entity and it doesn’t have to be one way to win a game or to score a goal,” Lampard told reporters.

“We have to score from different areas of the pitch and that’s pretty clear. We need to score more goals at this moment, for sure. That’s work for the squad. We will have to find it among the group.

“I know those stats and I know how many goals Eden Hazard was part of, in terms of scoring and assisting. So, they are facts that are real and ones we have to try to address with work. Which means, can we score goals from other areas of the pitch?

“Can we be more clinical upfront? And then the challenge is clear for the strikers and the attacking players. Can you be the players to score those goals? Because I agree the top teams in the league tend to have players that are scoring regularly.

“They do win games that are tight, who do make you clear in games in good periods, that you score enough goals to put the game to bed. And that’s a challenge for us because it’s something we aren’t doing and we need to do.”

The Belgian provided 16 goals in the Premier League last season to go with 15 assists as Chelsea finished third behind only Manchester City and Liverpool.

“But I haven’t considered that, and the players should just play as they play. There is enough quality in this team to win games for sure without Eden.

“I understand certainly [Mateo] Kovacic, he has the ability and quality in his game and talent to chip in with goals, but I can’t ask them to be all things in one at one point, [like expecting] Jorginho to set the tempo from midfield and knock in 10 goals a season.

“That would be tough. But as a team and from the wide areas and certainly from the striking areas, if players like Mason [Mount] and Ross [Barkley] have those attributes. Ruben [Loftus-Cheek] when he was in the team last year has those sorts of attributes.

“Those players, of course, I would ask for a contribution from them. Goals are important from the modern midfield player to try to reach double figures and more. I have belief in Tammy and Oli and Michy, our wide players, from midfield. to score goals.

“It is certainly not the way we should be looking at it, ‘I wish we had a Didier Drogba.’ No, this is 2019. We need to try and score goals and look at the problem ahead of us.” 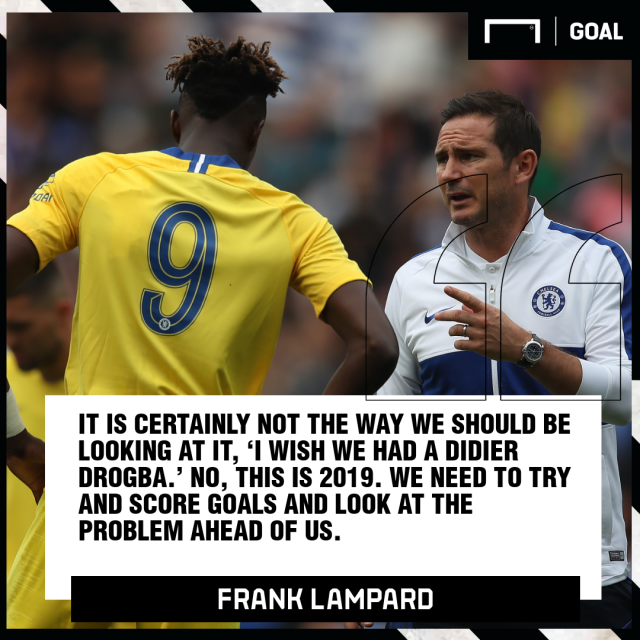 Chelsea’s rivals Man United missed a decisive penalty on Monday which would have likely seen them earn another three points. Paul Pogba took the ball off Marcus Rashford, who had just struck from the spot against Chelsea one week early.

Ole Gunnar Solskjaer has since come out and said that the pair are allowed to discuss who takes the penalty with no preferred taker between them.

Lampard has gone for a different approach than his opposite number and has a clear penalty taker at Chelsea. He is no stranger to penalty controversy though. having argued with Paulo Di Canio at West Ham and Drogba at Chelsea over them during his playing career.

“The Di Canio situation, I think he had been injured, I had taken one and scored it, and he came back into the team and he was the man,” Lampard added.

“Probably quite rightly he took the ball in the end there. I was probably trying to make a little mark and I got put in my place by Di Canio, which was fine.

“That was a little lesson there. And actually, it happened a few years later with Didier at Chelsea, and we had a penalty and me and Didier are like that, we are very close, and it was dealt with very quickly.

“I watched the game and I saw the comments around it on the television straight after, and I can see all sides of that story. It can happen. People feel competitive, feel confident in the moment, where you have a penalty taker and you also have a second pen taker if things happen in games.

“I think it is really important to do that, especially if you are really confident, and someone is your man. But that is not always the case. So, it is very easy to comment from the outside, where you have a couple of players that are vying for it and that are confident in games then you can have issues. The issues only arrive when the ball does not go into the net.