With Wednesday’s Group D game at the Etihad Stadium poised at 1-1, Pellegrini rejigged his attack by moving De Bruyne up front and the change paid off when the 24-year-old fired home left-footed fromYaya Toure‘s pass.

It was De Bruyne’s first Champions League goal since his club-record Â£55 million ($84.8 million, 74.8 million euros) transfer from Wolfsburg and it had the effect of lifting City three points clear of Sevilla and to within a point of leaders Juventus at the group’s halfway point.

“We bought Kevin because we thought he was a very creative player and he has goals in him,” Pellegrini told his post-match press conference.

“This team always tries to play attractive and offensive football and for that you need good players. I think that in all senses, he was the perfect player to arrive to our team.”

De Bruyne’s strike, his seventh in nine games for club and country, was City’s reward for a dogged display in which they weathered several spells of Sevilla pressure. 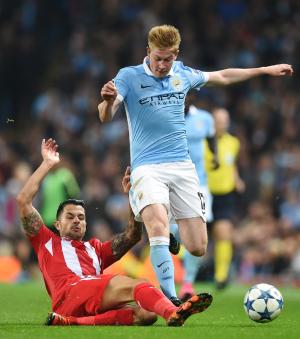 City trailed for only six minutes, Adil Rami‘s own goal cancelling out Yevhen Konoplyanka‘s 30th-minute opener, and yet prior to a late surge by the Premier League leaders, it was the Spanish side who looked the more likely winners.

But after an opening 2-1 loss to Juventus, City have now come from behind to win twice, having beaten Borussia Moenchengladbach 2-1 on their previous outing courtesy of a last-minute Sergio Aguero penalty.

“It’s important because we won both games in the last minute and in both games we were one goal down,” Pellegrini said.

“Maybe you’ve had a lot of criticism about this team in Europe, but I think that these two last games reflect that we have the character to try to win.

“We will try to improve our play, but for me the character, concentration and intensity to win in Europe is also very important.” 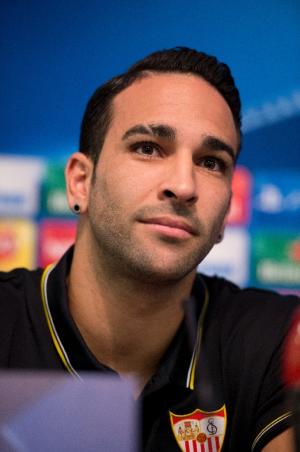 City will now switch their thoughts to Sunday’s trip toManchester United and Pellegrini said they would approach the derby with a spring in their step.

“When you win, it’s very important for the trust (confidence) of the players to arrive at an important game like the derby winning and not losing, with a lot of doubts,” said the Chilean.

“It’s a very tight (Champions League) group with nine points more to play for, but now it’s important to recover and continue having good performances in the Premier League.

“It’s always good to arrive at a derby when you’ve won.” 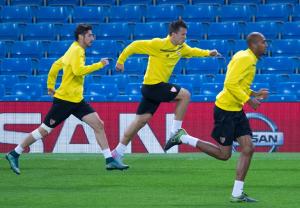 Pellegrini refused to be drawn, however, when asked whether captain Vincent Kompany would remain on the bench at Old Trafford, with Nicolas Otamendi and Eliaquim Mangala having been preferred to the Belgian — fit again after a calf problem — against Sevilla.

“We have a lot of different things to think about,” was all he would say.

Defeat prolonged a difficult start to the season for Europa League champions Sevilla, who are currently 13th in La Liga with only two wins from eight games.

But with home matches against City and Juventus to come in the Champions League, sandwiching a trip to Gladbach, coach Unai Emery remains optimistic about his team’s chances of reaching the round of 16.

“The next game is at home and the Sanchez Pijuan is really special, where the team usually plays to a high level,” he said.

“We’ll have the fans behind us, and I won’t give up while it’s still possible. We have chances to win the next game and if we do well, we’ll be in with a shout.

“We can learn from what we’ve done in the short term, and then think about the next game againstGetafe.

“We might be frustrated, but we need to realise we’ve learnt things about ourselves that will make us a better team.”