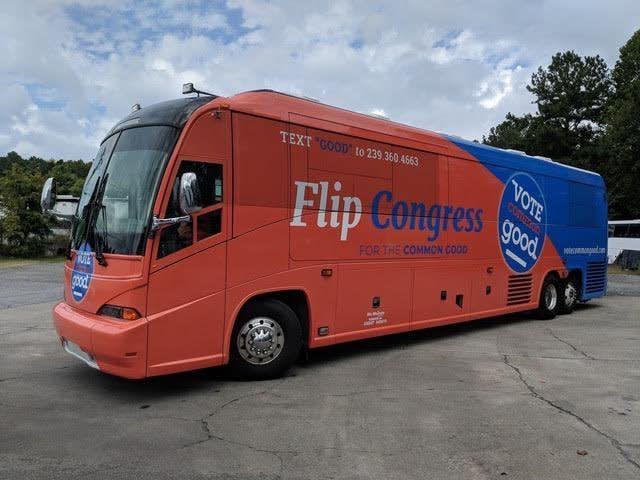 Driven by the belief that Republican lawmakers have failed to advocate for core Christian values, the “Vote Common Good” bus tour will hit more than 30 congressional districts where Democratic challengers are hoping to unseat Republican incumbents.

Doug Pagitt, a Minneapolis pastor and the executive director of Vote Common Good, said progressive Christians are disturbed at what they view as Republican lawmakers’ failure to “restrain and resist” the Trump administration’s worst impulses.

“Evangelicals care about the least of these, and I believe them when they say it,” Pagitt told HuffPost, referring to a Bible passage instructing Christians to care for vulnerable groups. “But then they vote for politicians that invoke policies that don’t care for the least of these.”

Pagitt believes many evangelicals are torn between longtime loyalty to the Republican Party and their own personal dismay at GOP policies that contradict the Bible’s call to welcome the stranger and care for the marginalized.

“What we’re doing is trying to give courage to people whose hearts are already opened, whose beliefs have already shifted, to say that they can vote and act according to their own beliefs,” Pagitt said.

The 14-state bus tour kicked off in Allentown, Pennsylvania, last Tuesday, with a scheduled stop in Holland, Michigan, on Monday. The bus will visit key Midwestern and Southern states ― and is scheduled to spend six days in Texas, where Democratic Rep. Beto O’Rourke is vying for Republican Sen. Ted Cruz’s seat.

The tour is scheduled to end in Fresno, California, on Nov. 2 ― days before the midterm elections.

White evangelical Protestants have been staunch supporters of the Republican Party, often because of its conservative stance on culture war issues such as abortion access and LGBTQ equality. Eighty-one percent of white evangelicals voted for Trump in 2016.

Vote Common Good believes other issues should inform how evangelicals vote this year ― topics like immigration, health care, poverty, and care for the environment.

Progressive Christians are outraged by the Trump administration’s restrictive refugee policies and its separation of immigrant families at the U.S.-Mexico border, Pagitt said. They were dismayed by the White House’s efforts to dismantle the Environmental Protection Agency’s mandate and the Trump administration’s sweeping overhaul of the U.S. tax code, which skewed overall in favor of the wealthy.

On its website, Vote Common Good says it is encouraging people to vote “with religious, racial, and gender minorities” and against policies and politicians who “promise special privileges for any religion, including our own.”

“We need candidates who would not turn their back on the poor and the sick, who would not separate children from their parents, who support liberty and opportunity for all people,” Arkansas pastor Robb Ryerse, Vote Common Good’s political director, said in a statement. “Although I consider myself an Eisenhower Republican, I think people are more important than party, and that’s why I’ll proudly vote for Democrats who share my values.”

Although I consider myself an Eisenhower Republican, I think people are more important than party, and that’s why I’ll proudly vote for Democrats who share my values. Robb Ryerse, pastor and political director of Vote Common Good

Vote Common Good says it is nonpartisan and simply supports the candidate in any given race who is more closely aligned with evangelical values. However, the group is only backing Democratic candidates this year, and one of the Democratic Congressional Campaign Committee’s vice chairs, Rep. Ted Lieu (D-Calif.), helped select the tour stops.

The group has also offered to help personally train Democratic candidates who want to learn how to address religious voters, particularly evangelicals.

The organization’s support for the Democratic Party is tied to its overarching goal this year ― to shift congressional power away from the GOP as “a reaction to the policies, actions, and tone of the Trump administration and Congress in recent years,” Vote Common Good said in a statement.

While other progressive Christian leaders have largely tried to avoid labeling themselvesas part of the religious right or left, Pagitt said he thinks its important to call out the lawmakers responsible for unacceptable policies.

“The need to flip Congress has some of us behaving in ways we have never had to before,” he added. “These times call for a response that matches the outrageous nature of what’s happening. This is not a typical partisan conversation.”